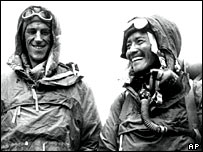 Sir Edmund Hillary, one of two men to first scale Mount Everest and live to tell the tale, has died age 88. Not only was he a mountaineer of legendary repute, but he was a tireless humanitarian devoting much of his time to setting up schools and hospitals in Nepalese Himalayan region.

My initial interest in armchair mountaineering was awakened by watching a documentary of Hillary and Tenzing’s first ascent. Since then, I’ve consumed countless books and films on the subject—more recently, I’ve finally finished reading The White Spider, a book documenting the first ascent of the north face of the Eiger, by Heinrich Harrer. It’s probably an interest I’ll have for the rest of my life, and it’s down to that first documentary I saw of two guys, with primitive equipment, hauling themselves up the tallest mountain in the world. Inspirational stuff.