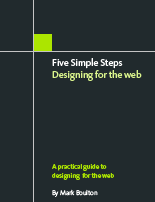 This is a project of mine that has been kicking around for well over a year now, so I thought I’d stick my neck out and just go with it. I’m going to be releasing Five Simple Steps: Designing for the Web as a PDF download book in a couple of months time (around Christmas). It will cost $19. It will be stacked full of useful, practical information for applying graphic design principles to designing on the web.

How much will it cost?

Like my Five Simple Steps articles, the book will be based on five steps you can work on to improve your design. These vary from very short and simple things like how to set a list correctly, to how to design a complex, modular grid system. They’re not meant to be a complete design lesson in the varying fields. More like a refresher for those pople who have design schooling and a brief, practical lesson for those who don’t.

There will be five chapters; Ideas and Research, Typography, Grid Systems, Colour, Layout and Form.

In each of the five chapters, there will be five steps. Simple really.

Aren’t they the same as your articles which are free on this site?

No. The new book will have rewritten articles following the same basic subjects. Not only that, but there’s two whole new chapters in there: Ideas and Research and Layout and Form (which won’t be available free. Yet.) The chapters will be rehashed, reordered and rewritten. I’ve risen the bar in terms of quality and the illustrations produced. I’m pretty chuffed with the results and I hope you will be too.

Is there a printed version?

Not yet. I’ve thought about Lulu and other self-publishing printers, but at this stage I’m focussing on the core product and initial delivery as a PDF from this site. If there’s demand for a printed version, then I’ll certainly consider it.

Why not just get it published?

There’s a few reasons and I’ve thought long and very hard about the whole self-publishing thing. The first is market value. This book, as it’s very niche, has limited market value (in the grand scheme of things). This would make the returns for any publisher lower than, say, a CSS book with a slant to simple steps. You see, CSS sells books. Fair enough. But being a bit of a control freak, this project is my baby and I wanted it produced and released on my terms.

Give me your email address

And I’ll give you $5 off when the books available. How’s that for a bargain?

When is it out?

So, there you have it. Pop over to the site and sign up now for the discount. Keep tuned for the next installment of the latest Five Simple Steps article (colour), which is due to be posted some time over the weekend.