Last week, CERN quietly redirected their URL to the new site. And Mark Boulton Design and the CERN project team saw the chapter close on nearly two years of work. 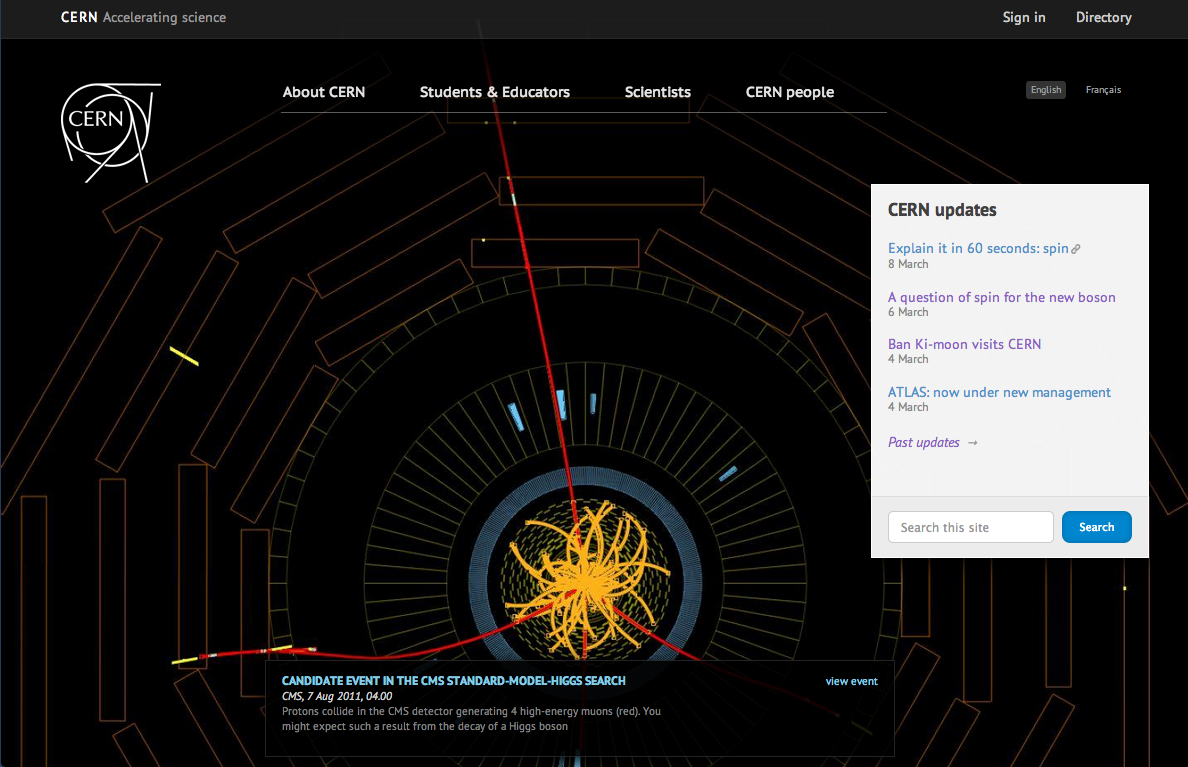 There is much to talk about with a project of this scale. Probably the first thing to say is that this was not a website redesign project. The project started with the very simple statement: 'we have a content problem'. I'd like to think it's a problem we solved, but it also went much deeper than that.

As we all know, the question 'why wasn't I consulted?' can derail almost any endeavour. This was no exception. So, early on in 2011, the Mark Boulton Design team spent months talking and listening. In fact, the majority of our first six months on the project was spent trying to understand CERN's audience – both internal and external – and what CERN does for them.

As in 2008 and 2009, when we worked with the Drupal community, designing for community relies on one thing: listening for trends. Design by committee doesn't work because there are relatively few stakeholdersm and sometimes with big egos. Design by community works because of the sheer numbers and relatively flat hierarchy. Instead of ensuring the boss is consulted, it's more important to consult with just two types of people: those who have influence, and those who have a big mouth. Get both of them on-side, and your job will be easier.

We embarked on a good few months of content research – audits, interviewing, process-audits and the like – before producing a strategy that sat alongside a new Communications strategy from the CERN comms team. Together, these would redefine how content is created and managed at CERN, and how it gets published to the web.

The new content for CERN is Future Friendly. It's adaptive – meaning it's carefully chunked into small fields in the CMS and tagged with really great meta data so it's able to shift and flex into different containers. No WYSIWYG here. Just really smart, well-structured – and reusable – content.

To my mind, good design decisions rely on good research. And for this project, we had some great research throughout. A broad amount of data was gathered by various means and filtered down to the design and product team. Not by way of reports and documents, though. In my experience, these often get cast aside. No, in our team we had Emma embedded with the design team. Always present with up-to-date insights into the audience needs so that she could literally sit beside us to help us guide some of the design decisions.

But it's not just for us.

CERN now has detailed information about their users available for anyone who creates a website, or writes for the web, at CERN.

I've written about the design strategy for CERN before. How the content needed to inspire, educate and inform the various audiences of the website, but we needed a simple model in order to map the content and the subsequent presentation of the content. Our Make Mantra – Create Wonder – was born, and is still used today as way of gauging how content is to be created and presented.

Practically, we did a lot of prototyping and very little else. Prototypes became the way we experimented with concepts, discussed and communicated ideas, worked on responsive elements. These prototypes then quickly moved from static HTML into dynamic lo-fi Drupal prototypes. This was so editors could get writing content quickly – actually using the tools they would eventually use on the site. All the while, we were continuing to iterate. In all, I think there were 5 or 6 alpha releases, 8 betas and many, many pre-alpha prototypes.

The new CERN public website runs on Drupal 7 (the most recent version of Drupal, that we designed the UX and UI for). It's mostly an out-of-the-box installation with a few bespoke modules that integrate with internal services such as CDS (CERN's media server) and Indico (the event management database).

I don't often do it, but this is the bit where I get to gush a little. The people involved in the project is pretty epic. But, there was a core team of designers, developers, product leads, researchers, content strategists and journalists that deserve a mention. Without them, this project would not have turned out the way it did.

Such a smart team. There are of course countless others – probably hundreds of people – I could thank. But, this isn't the Academy Awards. If you helped, you know who you are, and I'm very grateful.

This project always was a bit different. CERN is a special place, yes, but it takes a degree of risk and subsequent trust for an organisation of this scale to work with an external company for such a length of time. CERN invested time and energy to work with us at Mark Boulton Design. When we suggested radical changes to process due to our research findings – things that have had disruptive effect on the communications of the organisation – they didn't flinch. They knew it was the right thing to do. And supported us in our proposals. That takes a very special type of client; one that is willing to truly partner with a design company. And, I'd like to think the results speak for themselves.

When I reflect on the past two years work on this project, it's easy to think of it as 'bloody hell, that's a long time to make a website'. Well, yes, it is if that's all we did. But, in the words of James Gillies, Head of CERN communications team and project sponsor:

The launch will mark a significant change in how the Organization facilitates communications within the CERN community, as well as how it presents itself to the world. The first thing that you will notice is that the website looks different, but the most significant changes run deeper, and they form the basis for a new communications architecture.

He goes on to say:

There are many ways we could have chosen to build the new CERN website. We could have asked designers to create something beautiful. We could have created a template for content. Or we could have tweaked our existing websites. Instead, we went back to basics and reflected on who we want to reach and what their needs are. Then we asked them to help us. All our stakeholders have had an opportunity to influence our new website, and many of you have taken that opportunity. We have conducted regular audience research through online polling, usability testing, and in-depth one-on-one interviews, receiving feedback and input from thousands of users. I would like to thank everyone who got involved: your feedback has directly shaped many of the design decisions and turned this into a real community effort.

You see, it wasn't just a web site. It was helping CERN understand who they're talking to, what they're saying, and how to say it. Then, giving them the means to do it.

You can read more about the CERN launch from James Gillies.